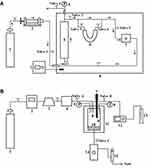 Background: Breviscapine (BRE) has significant efficacy in cardiovascular disease, but the poor water solubility of breviscapine affects its oral absorption and limits its clinical application. In this study, supercritical carbon dioxide (SCF-CO2) technology was used to improve the solubility and bioavailability of BRE loaded into mesoporous silica nanoparticles (MSNs).
Methods: The solubility of BRE in SCF-CO2 was measured under various conditions to investigate the feasibility of preparing drug-loaded MSNs by using ultrasound-assisted solution-enhanced dispersion by supercritical fluids (USEDS). The preparation process of drug-loaded MSNs was optimized using the central composite design (CCD), and the optimized preparation was comprehensively characterized. Furthermore, the drug-loaded MSNs prepared by the conventional method were compared. Finally, the dissolution and bioavailability of the preparations were evaluated by in vitro release and pharmacokinetics study.
Results: The solubility of BRE in SCF-CO2 was extremely low which was suitable to prepare BRE-loaded MSNs by USEDS technology. The particle size of the preparation was 177.24 nm, the drug loading was 8.63%, and the specific surface area was 456.3m2/g. As compared to the conventional preparation method of solution impregnation-evaporation (SIV), the formulation prepared by USEDS technology has smaller particle size, higher drug loading, less residual solvent and better stability. The results of the in vitro release study showed that drug-loaded MSNs could significantly improve drug dissolution. The results of pharmacokinetics showed that the bioavailability of drug-loaded MSNs was increased 1.96 times compared to that of the BRE powder.
Conclusion: Drug-loaded MSNs can significantly improve the solubility and bioavailability of BRE, indicating a good application prospect for MSNs in improving the oral absorption of drugs. In addition, as a solid dispersion preparation technology, USEDS technology has incomparable advantages.